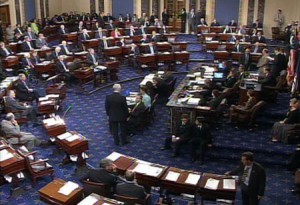 The US Senate has drafted a bipartisan measure that imposes a 90-day deadline for American military intervention in Syria and bars the use of US troops on the ground there.

Congress this week is debating President Barack Obama’s push for a military response to what he says was Syrian President Bashar al-Assad’s use of chemical weapons against his own people last month on the outskirts of the capital Damascus.

The Senate Foreign Relations Committee re-worded the resolution put forward by the White House to restrict it to “limited and tailored use of the United States Armed Forces against Syria, according to a copy of the draft obtained by AFP.

The authorisation provided by the resolution “shall terminate 60 days after the date of the enactment of this joint resolution, except that the president may extend, for a single period of 30 days, such authorisation” if he deems it necessary for the carrying out of such military operations, according to the measure.

“The authority granted in section 2 does not authorise the use of the United States Armed Forces on the ground in Syria for the purpose of combat operations,” it added.

Committee chairman Senator Robert Menendez, a Democrat who said he backs Obama’s plan for the use of force against Assad’s regime, and whose office crafted the measure with staff from ranking committee Republican Senator Bob Corker, said he expected a vote on the measure on Wednesday.

“Our negotiations have led to a much narrower authorisation that provides for the appropriate use of force while limiting the scope and duration of military action, prohibiting boots on the ground, and requiring the Obama administration to submit their broader plan for Syria,” Corker said in a statement.

“This is one of the most serious matters that comes before the Congress, so as we proceed to a potentially defining vote next week, the president and his administration must continue to vigorously make their case to the American people.”

House Democrats on Tuesday released their own joint resolution on military intervention in Syria, with a strict 60-day deadline for intervention with no apparent extension.
Congress returns from its summer recess on September 9.