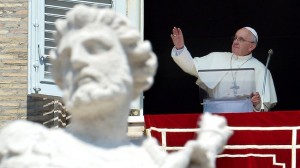 Pope Francis has called for the world to unite in a day of fasting and prayer for Syria next Saturday and said “God and history” would judge anyone using chemical weapons.

“May the cry for peace enter the hearts of everyone,” the pope told tens of thousands of pilgrims at his traditional weekly blessing in the Vatican on Sunday.

“I condemn with particular force the use of chemical weapons. I still have in my mind and heart the terrible images of the past days,” he said.

“There is judgment from God and history on our actions that no one can escape,” he said, in his first explicit reference to the chemical arms claims.

He urged the international community to make “every effort” to begin a process of dialogue in Syria.

The pope said he would lead the prayers with a five-hour vigil in St Peter’s Square on Saturday, just two days before the US Congress meets to debate possible strikes by the United States on Syria.

The relatively rare call for a global day of fasting and prayer was similar to one made by late pope John Paul II following the September 11 attacks in 2001, Vatican expert Luigi Accattoli told AFP.

Although he did not apportion blame for the alleged chemical attack, the pope’s reference to divine judgment was also similar to John Paul II’s call for members of the Italian mafia to confess their crimes and repent, Accattoli said.

His exhortation “Never again to war!” echoed a famous speech made by another of his predecessors, Paul VI, at the United Nations during the Vietnam War.

The pope’s call came as the United States, France and other countries were making plans for a limited armed response against Syrian President Bashar al-Assad’s regime over its alleged use of chemical weapons.

The Vatican has repeatedly pushed for a negotiated solution to the conflict and has already criticised plans by global powers for an armed intervention.

It has been more cautious, however, than some Christian leaders in Syria and the region who have openly defended the current Syrian government seeing it as a guarantor of a multi-religious state.

Christian minorities are concerned about the rise of radical Islam in the region and point to the example of Iraq, where there has been an exodus of Christians faced with violence and discrimination.

“My heart is profoundly wounded in these days by what is happening in Syria and I am anxious about the prospect of dramatic developments,” the pope said.

“War leads to more war, violence to more violence,” he said, voicing hope that “a chain of commitment for peace will unite all women and men of good will.”

“Never again to war!” the pope said in his emotional speech, echoing a call made by late pope Paul VI at the United Nations during the Vietnam War.

The pope said he extended his invitation to push for peace in Syria to all Christians and the faithful from other religions, as well as non-believers.

“With all my strength, I call on the warring parties to listen to the voice of their own consciences, not to close themselves in their own interests but to look on the other as a brother,” he said.

Fasting in the Catholic tradition is not as strictly interpreted as in other denominations or faiths.

“Everyone interprets it how they want. It can mean not eating or not drinking or missing only some meals or some courses in a meal,” Accattoli said.

He said there have been other days of fasting and prayer for peace in Catholic Church history but these are rarely linked to a specific conflict. [AFP]