The quest for wealth has sent many into taking desperate steps as residents of Masfala area of Ibadan, Oyo State were shocked to their marrow on Tuesday, September 17, when a polythene bag containing human parts was discovered in an uncompleted building by policemen who stormed the area at noon. 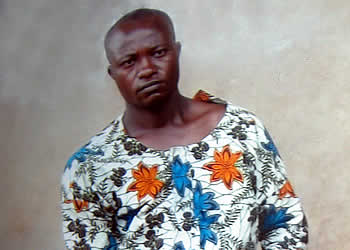 They were further amazed when the culprit turned out to be an herbalist, Abideen Raheem (35), who lives in a building very close to where the human parts were found. The parts were two hands cut from the wrists down.

The suspect is currently helping homicide detectives at the State Criminal Investigation Department (SCID), Iyaganku, in their investigations into the case.

Crime Reports gathered that information about the presence of the body parts in the neighbourhood first got to Operation Burst operatives. They were joined by detectives from Ogbere police station, and when confronted with the body parts, Raheem confessed that he was the one who put them in the polythene bag but claimed that he took them from a dead body he found at Ibadan Toll Gate area.

When detectives went to the spot he claimed to have seen the dead body, no carcass was found, an indication that the suspect was economical with the truth.

Raheem however opened up at the CID during interrogation, confessing that he removed the hands and head from a corpse in a grave at Muslim cemetery at Aba Onde area on Monday September 9 and hid them beside the cemetery. He revealed that he went back a week after, precisely on September 16 to take the hands while he still kept the head there.

Police sources told Crime Reports that the head had been recovered from where it was kept, but the identity of the corpse remains unknown.

In an interview with Crime Reports, the deceased said it was his quest to become rich that pushed him to committing the act, saying that he knew he was in trouble when police came to arrest him. He also said that the act was his first attempt. The Ibadan indigene, who is married with three children, said he was an herbalist and also into poultry business. “I learnt the profession from a herbalist who is dead. My poultry business failed during last Ramadan period as I lost 100 birds.

“I went to Muslim burial ground at Aba Onde to exhume a corpse from a grave. I cut the hands and the head. I used my hands to dig the grave and cut the parts with the knife I took there. The corpse was already decomposing so it was not difficult. I wanted to use them for money ritual for myself.

“The Baba who trained me said if I got those parts, I would burn the hands along with a snail, a turtle and Sawepepe leaves and mix the ash with black soap. I would then put the soap on the head and would be using it to litter the floor of my room so that my business would get be boosted by the number of the clients that would be flocking my office for consultation,” he narrated.

Though he said he regretted his action, he stated that he would not have known that God existed indeed if he had not been caught. He pleaded for mercy from the government, promising not to do such again.

Confirming the story, the police image maker, Olabisi Okuwobi-Ilobanafor said that the state police commissioner, Mohammed Indabawa, had ordered the State CID to conduct further investigations into the case, adding that the suspect would be charged appropriately after the conclusion of investigations.