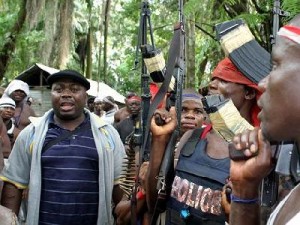 One of the ex-militant leaders in the Niger Delta, Dr. Ebikabowei Victor Ben, alias ‘General Boyloaf’, has said that oil theft in the Niger Delta will not stop until the Federal Government takes appropriate steps to compensate the natives of the region.

Boyloaf, who is one of the Niger Delta ex-agitators, who brokered the amnesty deal with the late President Umaru YarÁdua, said in Abuja that oil theft had soared in the region because the owners of the land where the oil facilities crisscross did not feel any sense of belonging after many decade of oil production.

Boyloaf also said that those who are making use of crude oil found in their back yards should not be referred to as ‘oil thieves’ as they were only making use of their God-given resources.

“I hate to hear the word ‘oil thieves or oil theft’ because the people you want to label as thieves are simply trying to make use of their God-given resources. In other words what they are doing is the legitimate ‘resource control’ that we have been talking about.

“The truth of the matter is that the Niger Delta people are simply controlling their resources and not stealing any oil,” Boyloaf said.

Boyloaf said the ongoing problem in the Niger Delta was as a result of the negation of the original terms of the amnesty deal, which they entered into with the Federal Government in June 2009.

He regretted that what was being implemented by the government under the guise of amnesty fell short of the character and spirit of what they signed with the YarÁdua government, adding that Nigerians should ask the government why certain components of the deal were not implemented till date.

While accusing politicians, who were not part of the amnesty, of hijacking the programme, Boyloaf alleged that the key components of the programme like the offer of lifeline and rehabilitation of former agitators had been abandoned by the Federal Government.

“We were abandoned and turned into beggars once we accepted amnesty. Today, what you have in the name of amnesty is not what we signed with Yar’Adua.

He said that the stoppage of the oil pipeline protection contracts, which were awarded to former agitators, was one of the factors responsible for the rise of oil bunkering in the Niger Delta.

According to him, the stoppage of the oil protection jobs has forced the natives to resort to other jobs in a bid to survive and warned that the next phase of the Niger Delta crisis may be worse than the previous one if the government fails to implement the terms of the amnesty to the letter.

Boyloaf, who also accused security agencies of aiding and abetting oil theft, challenged them to show why the big names that are behind the illicit trade have never been exposed and brought to justice.

He said, “Nigerians must be made to know clearly that over 75 percent of the oil said to be stolen in the Niger Delta belongs to the security agencies and they must be held responsible for the rising theft.

“If the government is serious about the issue of oil theft, it must revisit the surveillance contract and empower communities and stakeholders to take up the responsibility of protecting the pipelines, which run through their back yards.”

On the 2015 election, Boylaof claimed that although he was not a politician, Nigerians must allow President Jonathan to run out his two terms as provided for in the Nigerian Constitution.

He said, “The decision to run for a second term is solely that of President Jonathan; if he so wishes, he is allowed by law to do so.

“I strongly believe that no group of persons should harass or intimidate him from exercising his right. I will not go out of my way to ask the President to run for a second term. It is his decision he alone has to make.

“Let me take seize this opportunity to appeal to our northern brothers not to mistake our resolve to maintain peace in the Niger Delta region as a form of weakness. Nobody should blame our people when they react forcefully on issues associated with these matters and many other unwarranted attacks on our sons and daughters by those who think they own Nigeria and our commonwealth and think that the Niger Delta people must continue to be subservient to them. A word is enough for the wise,” he warned.

Boyloaf also said that the furore surrounding the sale of the OPL 245 to Dan Etete, former Petroleum Minister, should be allowed to rest, as he was not the only Nigerian, who was allocated an oil block. [Vanguard]