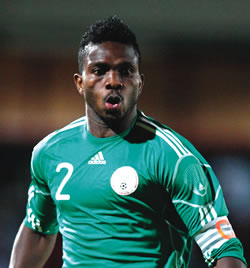 Yobo played bit roles at the 2013 Africa Cup Of Nations triumph in South Africa but has been excluded from the national team set-up ever since.

No Nigerian men’s footballer has attained the 100-cap status and with less than 10 matches to achieve that, Taribo said the Fernabahce defender deserves to be honoured.

The former Inter Milan centre-back said, “We should honour Yobo by ensuring that he gets his 100th cap for his country. We should celebrate someone, who in the history of our football, has played to that level of football.

“I am not begging Keshi to invite him because he deserves a recall to the squad after the World Cup qualifier against Malawi. Youngsters Kenneth Omeruo and Godfrey Oboabona need to understudy him.”

“I don’t think Yobo has reached his peak. So, why has he been left out? I can’t compare the current players with him, at least we watch him play in Europe. He can still play at this level for up to six years.

“But if you make a name early in Nigeria, they say you are old and tired. It happened to me even when I was playing for the best club in the best league in the world. In Europe, they celebrate experience unlike here.

“Every team looks for experienced players because in a footballer’s last days, his best comes out. Look at (Diego) Forlan, he is still vital to his country despite his age,” Taribo added.