Want to know whether he’ll be good in bed before you agree to that second date? Discover the 10 tell-tale signs that reveal whether he’s likely to be hot (or not) between the sheets… 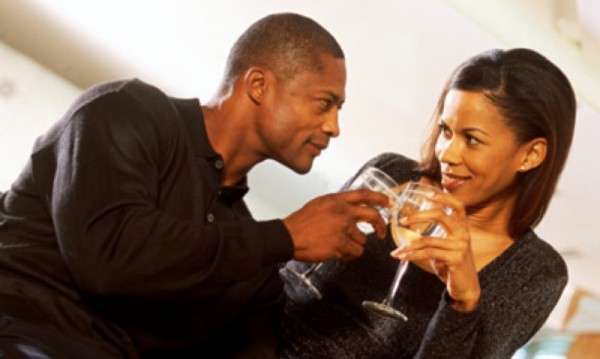 1. He has a big appetite

Want a man who makes love with gusto? Suggest a dinner date and watch how he eats. After all, how he tucks into his food should give you a good indication of how he might nibble on your ears, neck, toes… and everywhere else in between.

For starters, does he have a hearty appetite? Great lovers enjoy all the pleasures life has to offer – especially the sensual ones, like eating. A good appetite usually mean’s he’s got a lusty libido to match.

Does he savour each mouthful of food or stuff his face? Watch out for the wham-bam-thank-you man who demolishes a meal in 10 seconds flat. There’s a difference between a healthy appetite and a man who’s in a rush to satisfy his needs.

It’s estimated that 93 percent of human communication is via body language and tone – and only 7 percent is conveyed by the actual words we use. When it comes to talking sex, the body doesn’t lie.

If you’re on your first date and notice that he avoids eye contacts, sits back and away from you or has his arms folded, it’s not worth having a second date – no matter what he says. These are all signs of disinterest – or at the very least, you’re dealing with a cold fish.

If he keeps a close eye on the door and his feet point towards the exit, get your coat and go. He’s either waiting for a better offer to walk in, or wants out – so don’t waste your time.

3. He dresses well – but not too well

We all want a man who looks good – but if he has more lotions and potions and takes longer to get ready than you, it doesn’t bode well.

If he’s a complete peacock – obsessed with his looks and skin care regime – he may not like ‘messy’ fun in bed. And he might be more concerned with the way he looks in the mirror then letting go for a hot romp. Worse, he might be overly critical of you, how you look and what you do in bed.

If he’s let himself go and doesn’t care at all about looks he’ll probably be lazy in bed.

Dancing can be intimate, passionate and fun – watch his moves on the dance floor and you’ll get a good idea of his skills between the sheets. So what exactly should you be looking for?

Three things, variety, rhythm, and an ability to lose himself in the music. Bad dancers and awkward, self conscious floor-shufflers need not apply – and if he can’t dance without moving the lower half of his body? It’s a safe bet to assume he’s not driven by lust.

Avoid the exhibitionists who are likely to be as vain and self-absorbed in bed as they are on the dance floor, and the man who makes jerky, hectic movements. He might as well have a neon sign around his neck saying ‘I’m a premature ejaculator.”

While money can’t buy you love (or make you great in bed), there’s a lot you can tell about a man from his ‘relationship’ with money.

If he flashes the cash and tries to show off through money he’ll probably put on a ‘performance’ in bed but not actually ask you what you want. “Such men usually have a tried-and-tested sex routine and don’t bother finding out what a new partner likes, so you’ll have to tell him loud and clear what works for you.

On the other hand, if he’s tight with money there’s a good chance he’ll hold back in bed too. An inhibition to spend money will probably be reflected in sexual inhibitions too.

Have you noticed what he does with his hands when he talks? According to the experts, how a man gestures reveals what kind of lover he will make. And if he can’t help expressing himself with his hands over dinner, just imagine what use he’ll put them to in bed.

Hand gestures can reveal a great deal about a man’s sexual personality. A man who uses his hands in an expressive and tactile way is more likely to make a sensuous lover.

Steer clear of men who fiddle with their hands. According to the body language experts, men who fidget are likely to be unsure of themselves or disinterested in you.

You can tell a lot about a man from the way his kisses – and not just whether he has good technique or not. If you get to first base and the kissing is intense, passionate and exciting, there’s every chance the sex will be too. If it’s not, then why go to third base at all?

If he refrains from shoving his tongue down your throat, he won’t rush you into sex and that means you can expect foreplay galore. And if he gets a little carried away during the make out session? Even better, who wants a lukewarm lover?

The most promising lovers are those who use a variety of techniques in their kiss, she says. If he nips, chews, bites, and licks and really explores all of your mouth, there’s every chance he’s going to be good in bed.

8. He likes to sample new things

It’s not just how he eats but what he eats. If your dinner date refuses to try anything new, or won’t eat anything that doesn’t come with a slab of red meat, it could be cause for concern.

Let’s face it, if he’s not into experimenting or trying exotic fare, he’s hardly going to dish up the Kama Sutra behind closed doors, is he? Bread-and-butter taste in food equals bread-and-butter sex.

The real test for food though, is if he shares. The guy who offers you a mouthful of his main course and chooses the yummiest-tastiest part for you to try is definitely a keeper. And if he hand feeds you chocolate dessert from his spoon? Marry him!

9. He drives a stylish car

A man’s choice of car says a lot about his sexual prowess. You might think that a flash motor guarantees a high performance ride in bed – but you’d be wrong. A man who drives an expensive sports car may be more interested in looking good than he is about you. What they say about flash cars and penis extensions is true. If he’s all show you have to wonder if he has substance too.

Of course it’s not just what he drives, but how he drives. No one wants to stay in the slow lane forever, but if he speeds and is reckless there’s a good chance he won’t make a considerate lover. A man who takes his time over his manoeuvres and performs them with skill and precision is likely to give you a smooth ride in the bedroom too.

Men who keep fit tend to make good lovers – they’re likely to feel more confident in their appearance, plus they have the stamina to keep going all night. Not to mention having good multi-tasking skills and great hand to eye co-ordination!

But what can you tell about a man from the type of fitness he does, or the sport he plays? If your potential lover is a cyclist, runner or swimmer, you’re in luck. These all require good endurance, which means he’ll know how to pace himself and how to go the distance.

Obsessive fitness freaks, or men who spend hours pumping iron at the gym are best avoided. If he’s more interested in building big muscles than his fitness, it could be a sign that he’s lacking in confidence or trying to cover up an insecurity – like being rubbish in bed.