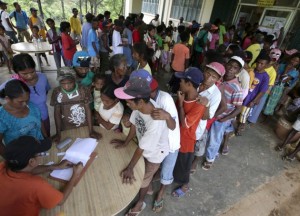 About 100 village officials and potential leaders have so far died in the run-up to the October 28 elections, the Philippine National Police (PNP) said.

With 24 days to go before polls in Philippines, election-related violence is expected to reach a feverish pitch even after the PNP last week declared a ban on carrying firearms in public on civilians and off-duty police and military personnel.

PNP chief Director General Alan Purisima said that among the security measures being laid out by the PNP is the strict implementation of the gun ban as well as the activation of static and mobile checkpoints.

Purisima had recently issued command memorandum circular SAFE 2013-Alpha (Secure and Fair Elections-A), which set policy guidelines in connection with the polls. The top police official said the PNP is closely coordinating with the armed forces to prevent any attempt by the communist insurgent group, New Peoples’ Army, to exploit the elections by demanding money from candidates.

According to records of the PNP, from January 1 to September 22, some 96 incumbent village officials and potential candidates have been killed in 177 incidents while 41 others were reported wounded. Authorities said among the likely cause of violence is political rivalry among the candidates.

PNP had also identified 150 areas of immediate concern in the country due to high potential of violence taking place prior, during and after the polls.

Philippines holds its elections for village leaders every three years and violence is a hallmark of the political exercise, be it the national polls or mid-term level. During the grassroots poll, Filipinos will elect one village chairman, and seven councillors.

Village-level governance units are accorded with wide ranging powers — from settling domestic conflict such as that involving members of the family — to resolving local peace and order issues.