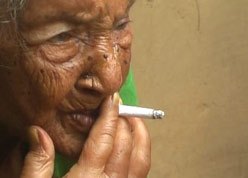 A 125-year-old woman, said to be one of the oldest women in India, died at her home in Orissa, her family said Sunday. Fulla Nayak claimed that smoking cannabis every day was her secret to long life.

Fulla Nayak, a resident of Kanarpur village in the coastal district of Kendrapada, died of old age complications Saturday.

According to her 72-year-old grandson, Fulla was 125. But as per a voter photo identity card issued by the government in 1995 she was 120 years.

The grand old woman lived in a small mud-walled thatched house in Kanarpur, about 25 km from the district headquarters. She is survived by two of her four daughters and around two dozen relatives.

Her eldest daughter, Jamuna, 92, lives in the same village. Her husband died at the age of 50.

Fulla was in the news when her grandson Narayan Nayak claimed last week that she could be the oldest woman living in the world. He had said that he would write to the Guinness book authorities to record the claim.

Fulla was known for her love of smoking ganja and cigars and palm juice. She also loved steaming hot tea.

She had never suffered any debilitating ailment throughout her life. Except for her weak eyesight, Fulla maintained good health and used to walk without support.