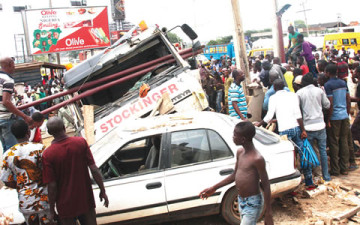 16 persons were killed in a ghastly motor accident when a fully loaded 14-seater bus ran into a heavy duty truck and a taxi on the ever busy Makurdi-Gboko road, reports have said.

Eyewitnesses said the accident occurred at about 9a.m. on Sunday after Wannune Market in Tarka Local Government of Benue state.

According to a witness, “the 14-seater bus belonging to Pleasure Travels was said to be heading to Jato-Aka in Kwande local government when it collided with a tanker that was coming from an opposite direction at top speed, after the truck had overtaken another car.

“The driver of another car following the tanker apparently lost control of his vehicle and also hit the already collided vehicles leading to the death of about 16 at the spot,” the eyewitness said.

A staff of Pleasure Travels who pleaded anonymity confirmed the development, saying that their staff, a mechanic who had joined the ill-fated bus to repair one of the company’s buses also lost his life in the mishap.