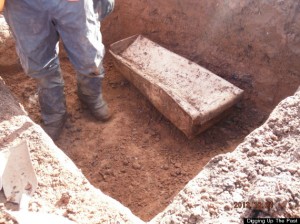 A group of intrepid treasure-seekers in England have stumbled upon what is believed to be the coffin of a young child dating back to the time of the Romans.

Metal detectorists from the Digging Up The Past Metal Detecting Club discovered the child-sized coffin last weekend in a ploughed field a few miles west of Hinckley, in Leicestershire, England, reports the Leicester Mercury.

“It was about four feet underground on a field but the coffin was made of lead so we had no problem finding it,” club founder David Hutchings told the Mercury. “It’s not been opened yet but it looks like it contains the remains of a child and it’s probably one of the earliest Christian burials in the county.”

Worried that the valuable coffin might also contain jewels or other precious items, police and volunteer guards were tasked with keeping a nightly vigil around the coffin until it can be safely excavated, reported the Mercury.

In an effort to preserve the sanctity of the site, local vicar the Reverend Linda Blayhas offered to say prayers over the coffin when it is pulled from the ground, as well as if and when it is ever reinterred.

“When I heard about what was found I thought it was a good discovery, but as it was a Christian burial in the first place I thought it only right Christian prayers be said,” Blay told the local Tamworth Herald.

Leicestershire County Council’s finds liaison officer, Wendy Scott, meanwhile the BBC that the remains were being treated in a respectful fashion.

“We have to remember this is human remains — it is a child’s body,” she said, according to the BBC. “It is the remains of a Roman occupant of Leicestershire so of course we are interested in it.”

The initial examination of the remainswill be conducted by the enthusiastic researchers of Archaeology Warwickshire.

“We are delighted to be able to help with this potentially extremely important find,” Archaeology Warwickshire business manager Stuart Palmer said, according to a press release from the Warwickshire County Council. “It will be taken to our offices in Warwick where we can examine it under laboratory conditions to see what it can tell us about aspects of Roman period life, health and of course death.”