The plane operated by Associated Airlines which crashed shortly after take-off on Thursday at the Mafoloku area of Oshodi in Lagos State had 20 passengers and seven crew members on board, a press release by the Aviation Minister, Princess Stella Oduah has said. 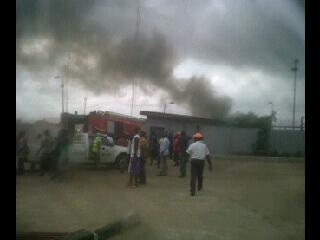 In the statement signed by her special adviser on media – Joe Obi – the minister said a few dead bodies have been recovered while some persons pulled out from the wreckage have been rushed to the hospital.

“An Embraer aircraft operated by Associated Airlines with Reg No SCD 361 enroute Akure from the Murtala Mohammed Airport, Lagos, crashed shortly after take-off at about 9.30 am local time. The plane had 20 passengers and 7 crew members on board.

“Emergency rescue operations commenced immediately by a combined team of Fire Service and security personnel. Some persons pulled out from the aircraft have been rushed to the hospital while a few dead bodies have been recovered. The rescue operation is still on-going.”

The plane is believed to have been chartered to convey the remains of former Ondo State governor, Dr. Olusegun Agagu, who died last month to Akure where burial arrangements have already begun since Monday.

The late Agagu’s corpse was reportedly accompanied on the ill-fated flight by some members of his family, associates and officials of the Ondo state government.