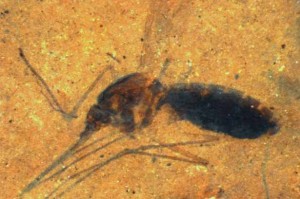 The oldest blood known has been found in a mosquito which was fossilised 46 million years ago.

It died soon after feeding and was perfectly preserved in the shale of a mountain range in Montana, USA.

Expert Dr Dale Greenwalt used state of the art technology to identify the blood in the previously unknown species of mozzie.

He told Proceedings of the National Academy of Sciences that the “improbable find” showed how little insects have changed.

The ancient insect was so well-preserved because it had been trapped in shale – a type of mudstone in which organic remains decompose much more slowly.

It was one of two mosquitoes discovered in the shale deposits.

“The insect had to take a blood meal, be blown to the water’s surface and sink to the bottom of a pond or similar structure to be quickly embedded in fine sediment – all without disruption of its fragile distended blood-filled abdomen.”

He said it’s not surprising it’s the first discovery of its kind despite the misconception of dinosaur DNA recovery from mosquitoes preserved in amber popularised by Jurassic Park twenty years ago.

Dr Greenwalt added: “The existence of this rare specimen extends the existence of blood-feeding behaviour in this family of insects 46 million years into the past.”

The new fossils – one female and the other male – are so detailed scientists were able to determine they represent two previously unknown species.