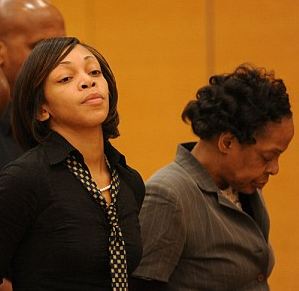 “Monster mom” Carlotta Brett-Pierce was just sent to prison for 32 years for one of the most heinous crimes imaginable.   She was given 32-years-to-life after her four-year old daughter Marchella died after being beaten and starved to death.   The little girl was covered in bruises and open wounds and she weighed only 19 pounds when police picked her up.

The little girl was drugged, beaten and tied to her bed at the time of her death.  The little girl was force fed allergy pills and beaten in front of her brother, Tymel.  When the boy came to his sister’s funeral, he brought food, so that his baby sister “can eat in heaven.”

The boy is now deeply traumatized by what he saw his sister go through.  He is now 7 years old.

The prosecutor in the case, Jacqueline Kagan said, “he brought with him food because he knew she didn’t get enough. And he told his foster mother, ‘I hope that she gets enough food and water in heaven,’”

The trial lasted a month, and ended on May 9. The jury only deliberated for one hour before sending the mother to prison. Calotta Brett-Pierce was given 32 years to life, and her mother Loretta was given up to 15 years for manslaughter.

The mother was defiant to the end, refusing to take responsibility for what happened to her child.

“I heard what you said,” she told the judge.

Brooklyn Supreme Court Justice Patricia DiMango said to the mother: “This child, at her tender age, was subjected to a h**l that no one should have to endure. What kind of person could do this to a child, let alone their own child?” she asked.

Brett-Pierce’s attorneys argued that the mother had a sick child that she didn’t know how to care for. But prosecutors got her to admit that in all those years of her daughter being sick, the mother never took her to the pediatrician.

The mother denied referring to her daughter as “that b*tch” during jailhouse phone conversations, instead referring to her as “my baby.” But there was a recorded call during which the mother said, “That b*tch wasn’t that f*cking light.”

Child Protective Services got involved with the family when the mother gave birth to a boy who tested positive for drugs. Two social workers have also been charged with criminally negligent homicide for failing to prevent the little girl’s death.