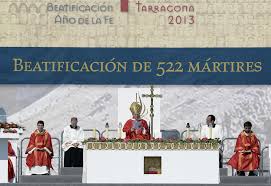 The Vatican has beatified 522 people – mostly priests and nuns – killed in the turmoil that led to Spain’s civil war.

The beatification, the last step the Roman Catholic church takes before sainthood, was conducted on Sunday by Cardinal Angelo Amato in an outdoor ceremony attended by thousands in Spain’s northeastern Tarragona region.

Among the congregation were almost 4000 relatives of those being beatified.

In the 1930s, Spain was engulfed in instability that saw the head of state, King Alfonso XIII, abandon the country and anti-clerical mobs attack clergy and burn churches.

The mayhem culminated in a 1936-1939 war, won by forces allied to Nazi Germany and fascist Italy and led by General Francisco Franco.