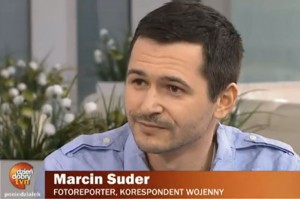 A Polish photojournalist kidnapped in Syria in July is safely back home after escaping his captors, Poland’s foreign ministry said Thursday.

Polish officials did not reveal how Marcin Suder was able to flee or give details of his time in captivity, saying only that he has been back in Poland for “some days”.

Suder’s mother told Polish radio he had been held in a dark basement before his escape.

He added: “He’s here since some days, surrounded by his family. He is in good health.”

Masked gunmen abducted the 34-year-old freelancer, who worked for the Corbis agency and other outlets, on July 24 during a raid on a media centre in Saraqeb in the northwestern province of Idlib.

No reason was given for his kidnapping and no one publicly claimed responsibility for the abduction.

“We also want to thank the (Polish) defence ministry for ensuring his air transport from Turkey to Poland.”

Suder’s mother said her son was in shock but otherwise mentally fine.

“Physically, he’s thin and, let’s say, some marks of something remain on his body. But he really doesn’t look that bad,” Krystyna Jarosz told Poland’s commercial RMF FM radio.

Without explaining the marks, she said he was held in a dark basement, without food at first: “Later he got a bit of food. It wasn’t a spa, I’ll put it that way.”

Press watchdog Reporters Without Borders says Syria is the most dangerous country for media to work in, with around 15 foreign journalists still missing or held hostage there.

At least 25 professional journalists and 70 citizen journalists have been killed since the start of the Syrian revolt in March 2011, it said. [AFP]