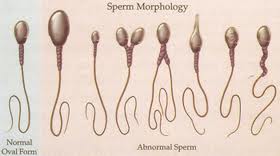 Sperm morphology — the size and shape of sperm — is one of the things checked in a semen analysis for male infertility. Sperm morphology results are reported as the percentage of sperm that appear normal when semen is viewed under a microscope. Normal sperm have an oval head with a long tail. Abnormal sperm have head or tail defects — such as a large or misshapen head or a crooked or double tail. These defects may affect the ability of the sperm to reach and penetrate an egg. However, having a large percentage of misshapen sperm isn’t uncommon; in fact, if your sperm sample contains only 4 percent “morphologically normal forms,” it’s considered normal. Morphology is just one piece of a fertility analysis and, by itself, does not determine fertility. Other important factors checked in a sperm analysis are: Semen volume Total sperm number Sperm concentration Vitality of sperm Motility of sperm If a semen analysis shows irregularities in any of these areas, a wait-and-see approach is generally tried first. Another semen analysis is usually done after four to six weeks to see whether sperm quality has improved on its own. If there are still abnormalities, tests may be necessary to look for an underlying problem. Even with abnormal sperm morphology, motility problems or a low sperm count, it’s important to remember that an abnormal semen analysis does not mean you are infertile. Many men with low semen analysis values are still able to father children. It just may take longer, a year or more. If you and your partner aren’t able to conceive through sexual intercourse, assisted reproductive technology such as in vitro fertilization may be an option.