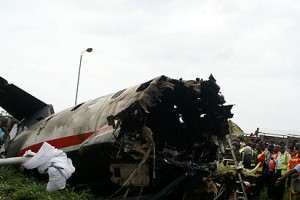 The Chief Operating Officer (COO) of Associated Airlines, Taiwo Raji, last night confirmed in a briefing that the ill-fated flight Number 631, which crashed at the Lagos airport two minutes after takeoff, actually had 20 passengers on board, of which seven survived while 13 were confirmed dead, putting an end to conflicting reports on the number of deaths.

According to him, the last time the aircraft insured locally by Sema Insurance, operated before yesterday’s flight was August 30, 2013, adding the last time it was taken for maintenance checks was on June 20, 2013.

Manufactured in 1990, the aircraft, according to Raji, was 23 years old and was one of the 10 aircraft in its fleet, six of which were serviceable.

Raji also said that five of the victims of the crash who survived were receiving medical attention at the Nigeria Air Force Medical Centre, Ikeja, Lagos, and at the Federal Medical Centre, Ebuta Metta, Lagos, but may be moved to a medical centre in Badagry because of the extent of the burn sustained.

He said it was difficult to contact some of the relatives of the crash victims but the company was making efforts to contact them.