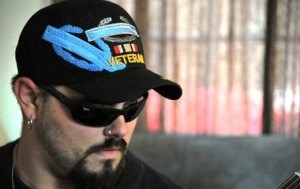 Allen Wayne Densen Morgan (pictured), reportedly pleaded guilty in federal court on Thursday, after being accused of trying to have his black neighbor killed by concocting a murder-for-hire plot with undercover officers, whom he believed were KKK members, according to All Alabama.

Investigators alleged that Morgan devised the twisted plot last August and sought the help of the white supremacy group, the Ku Klux Klan, to carry it through to the bitter end. Morgan reportedly told an acquaintance about his plan and the unnamed person then leaked the plot to the FBI. On August 22, Morgan spoke to an FBI agent thinking he was actually in contact with a KKK member.

Court documents allege that Morgan used racial slurs to describe his neighbor, whom he believed raped his wife at one point. The 29-year-old Munford, Alabama man then reportedly went on to provide, in graphic details, how he wanted his black neighbor killed.

Morgan, who allegedly told the agent he had fired a few shots at his neighbor for intimidation sake, wanted the man to “die a slow painful death.” He mentioned how he wanted his neighbor “hung from a tree like a deer and gutted.”

Morgan and the undercover FBI agent agreed to meet at a motel, three days after the initial call was placed to describe the killing method. He told the alleged assassin that he and his wife would be covered, as far as having an alibi; she would be hospitalized and he would be at a VA doctor’s appointment. The payment offered for the murder was a watch, necklace and gun.

Morgan met two undercover agents at an Econo Lodge in Oxford, Alabama. When he handed them a map to his neighbor’s home and described the intended victim to the agents, he was cuffed on the spot.

According to court documents, Morgan, an Iraq veteran, also suffers from post-traumatic stress disorder (PTSD), which develops after a terrifying ordeal that involved physical harm or the threat of physical harm. PTSD was first brought to public attention in relation to war veterans, but can result from a variety of traumatic incidents. Some of the condition’s side effects are bad dreams, frightening thoughts, flashbacks and feeling on edge. In Morgan’s case, PTSD included suicidal thoughts, which resulted in struggles with substance abuse.

Upon Morgan’s arrest, investigators did learn that his neighbor, the man he wanted killed, had a prior record. In 2008, he was accused of raping a 13-year-old and pleaded guilty to a lesser charge.

On September 26, Morgan was officially charged with using and causing someone else to use interstate facilities and travel with the intent to commit murder-for-hire. According to All Alabama, when Morgan was arraigned on Thursday, the Assistant U.S. Attorney Brad Felton, who is prosecuting the case, stated the government would recommend a sentence reduction because the defendant has accepted responsibility.

Morgan, who faces up to 10 years in prison, will be sentenced on February 27 of next year.