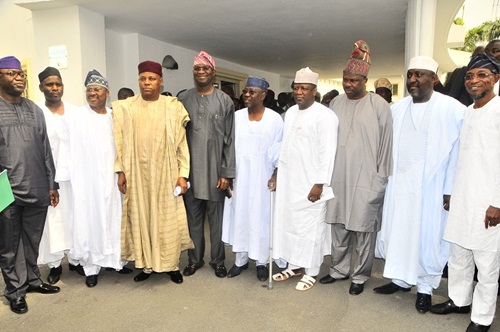 All Progressives Congress (APC) governors have opened a fully fledged secretariat to coordinate their activities in the Asokoro area of Abuja, the nation’s capital.

Prior to the present development, the 11 ‘progressive governors’ used to meet in their various lodges rotating the venue according to who presides at a particular time with no permanent secretariat.

But all that has changed as the association, known as the Progressive Governors’ Forum (PGF) with Governors Kashim Shettima of Borno, Adams Oshiomohole of Edo, Kayode Fayemi of Ekiti, Rochas Okorocha of Imo, Babatunde Raji Fashola of Lagos, Tanko Almakura of Nasarawa, Ibikunle Amosun of Ogun, Rauf Aregbesola of Osun, Abiola Ajimobi of Oyo, Ibrahim Gaidam of Yobe and Abdulaziz Abubakar Yari of Zamfara as members, now have a functional secretariat manned by a Director-General, who will coordinate the affairs of the Forum in conjunction with other staff.

It was learnt, however, that the Forum would not have a permanent chairman as it would operate a temporary system of leadership whereby any of the governors hosting the meeting would automatically preside as chairman.

It was further gathered that the secretariat shall have the responsibility of implementing all decisions of the progressive governors as well as come up with programs, governance proposals and recommendations for the APC governors.

The pioneer DG of the Forum, Salihu M. Lukman, who confirmed the development, said it was in line with strengthening the Forum that a functional secretariat was established adding that it will be concerned with organizing all APC governors to committing themselves to policy actions in their states that would promote social democratic programs of the party.

In addition, Mr. Lukman said the platform would also support the process of leadership orientation for APC structures at all levels across the country and initiate actions towards enhancing the growth and development of the larger Nigeria Governors Forum, NGF.