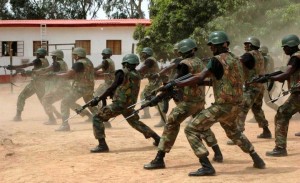 Three out of the six suspected Boko Haram insurgents arrested at the Maiduguri International Airport Monday, while returning from this year’s Hajj exercise in Saudi Arabia had been released, according to the 7 Division of the Nigerian Army.

Speaking to newsmen in Maiduguri, yesterday, spokesman of the Division, Captain Aliyu Danja said those released had no link with terrorists, contrary to reports by a section of the media.

According to Danja, arrests were made at the airport by security operatives where six suspected Boko Haram sect members were handed over to men of the division, but after thorough interrogation, it was discovered that they were neither terrorists nor members of Boko Haram Islamic sect. He added that three of them had since been freed by the Division and reunited with their families.

Danja also stated that the three remaining suspects were undergoing further interrogation, adding that they would face the full weight of the law if it was discovered that they had any link with terror activities either directly or indirectly.

Speaking on the arrest, a military source said, “we coordinated the interception and arrests of terror suspects at the airport last Monday,” pointing out that “the arrests were facilitated with the cooperation of airport authorities and National Hajj Commission of Nigeria, NAHCOM, which allowed security personnel to do their job thoroughly at the arrival hall of the airport at dawn.”