Home News Feed ASUU: Read The Stories Of Students Who Do Not Want To Stay...
Facebook
Twitter
WhatsApp

To keep their minds occupied, some undergraduates in Kaduna have ventured into various vocations as the strike by the Academic Staff Union of Universities (ASUU) continues. 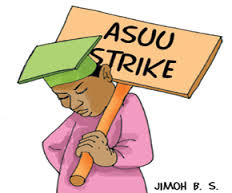 Grace Ocholi, a 300-level student of English at Ahmadu Bello University, Zaria, told the News Agency of Nigeria (NAN) on Friday that she found a temporary job as a fuel pump attendant at a petrol station in Sabon-Tasha area of the city to enable her earn some money until the end of the strike.

“Everyone in my house go out every morning to work, and my younger sisters go to school while I stay home and sleep awaiting for their return. “I am not okay with staying idle so I decided to engage in something useful,” Grace said.

Another student, Seun Ali, an HND Computer Science student of Kaduna Polytechnic said he worked at a friend’s barbing saloon to earn some money and to be occupied.

Henry Samuel of Mass Communication Department, Ahmadu Bello University, said he was helping his father in selling tiles  – something that he had been doing before before he was admitted to the university.

“So instead of wasting time waiting for the prolonged strike to end, I returned to continue from where I stopped,” he said.

The students advised their colleagues to engage in something meaningful while the strike lasted, so as not to fall into the temptation of going into crime due to idleness.

It will be reminded, that ASUU has embarked upon an indefinite strike June 30, 2013. The lecturers protest against the FG’s failure to honour a 2009 agreement signed between it and ASUU in 2009 pertaining to issues of university funding and improvement of infrastructure in the sector.