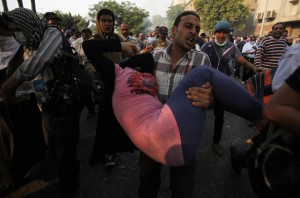 Violence continues in Egypt on Monday as ten people were killed in three separate attacks in Egypt, most of them soldiers and police officers, following violent clashes across the country one day earlier.

The deadliest attack was in the Suez Canal city of Ismailia, east of Cairo, where masked gunmen opened fire on an army patrol. Six soldiers were killed, including a lieutenant.

Meanwhile on Sinai, a suicide car bomber attacked the security headquarters in the southern city of El-Tor. Four people were killed, including the bomber, and 55 more were injured.

Mohamed Ibrahim, the interior minister, confirmed that the attack was a suicide bombing and said it was meant to “distract” people and cause instability.

Near-daily attacks on the peninsula have escalated in the three months since the Egyptian army ousted President Mohamed Morsi. But this was among the first in South Sinai, a popular tourist destination which has been mostly quiet for years.

The dawn attack caused only minor damage, but was nonetheless the most significant attack in the capital since a failed assassination attempt against the interior minister last month.

“We are expecting worse,” a senior security official told the Associated Press.

Also on Monday, a panel of judges recommended dissolving the Brotherhood’s political wing, the Freedom and Justice Party, signaling a wider crackdown on the group.

Their recommendations will be delivered to a Cairo court reviewing a case demanding the party’s dissolution on October 19.

Thousands of Morsi supporters have been killed, and more than 2,000 imprisoned, in the three months since his ouster.