Prince George made his first public appearance in three months today, as he arrived with his parents, Prince William and Catherine, Duchess of Cambridge, for his christening at St. James’s Palace. 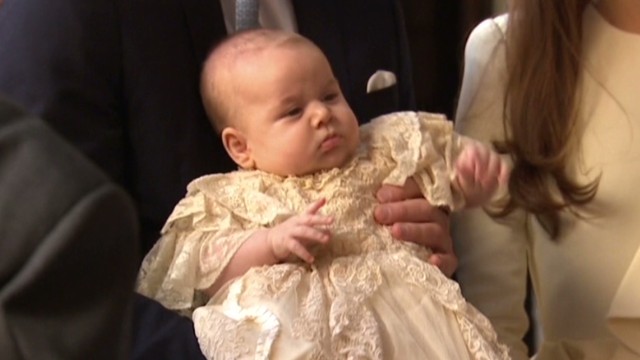 The baby prince smiled as he was shown off to family members including his great-grandparents, Queen Elizabeth II and Prince Philip, before the royals entered the Chapel Royal.

George was dressed in an elaborate lace and satin christening gown that’s a replica of one made in 1841 for the christening of Queen Victoria’s eldest daughter.

Being baptised into the church is more significant for George than for most people, since he is in line to become king, which would also make him the supreme governor of the Church of England.

The occasion has been kept uncharacteristically small, in a shift away from the larger ceremonies that his father and grandfather enjoyed at Buckingham Palace.

His grandfather Prince Charles and uncle, Prince Harry, are among the select few invited to the ceremony, along with Catherine’s parents, Carole and Michael Middleton, and her siblings, James and Pippa.