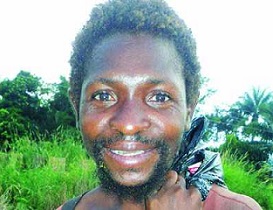 A 70-year-old man, Mr Ogbonnaya Ani in Umuose Urobo, Uburu, Ohaozara Local Government Area of Ebonyi State, is swimming in the ocean of grief as seven members of his family have been afflicted with madness one after the other.

According to report, Ogbonnaya Ani’s elder brother’s daughter is mentally challenged. His younger brother’s son is in the same condition. Three of his own children, a male and two females, are equally afflicted. His daughter-in-law is not left out. So, there are six mentally ill persons in the family and, perhaps, still counting. Worst still, one of Ani’s mentally challenged daughters is heavily pregnant and no one seems to know who the lover boy is. And before his first wife died, she exhibited some signs of madness.

His mentally challenged son, Igwe Ani, alias Martin Martin, set his house ablaze. So, currently, Ani and his family are squatting somewhere with the help of a relation.

Speaking with a reporter, Ani said, “It first started with Igwe and his sister, Ozieme joined later. While Igwe’s problem started at home, Ozieme’s started from outside the community. Again, another of my daughter who is married and a seamstress is also behaving abnormally. I cannot explain how this problem came into the family. From our parents, we did not experience any such thing. It did not happen to my eldest brother, who had died.

“It started about 20 years ago and it has been spreading from one person to another. Even my son’s wife who was married from another village and living in Enugu with Ozieme is also behaving in a way we cannot understand. I learnt that she is walking about the street but I have not seen her. The whole thing is surprising to us. It is an unimaginable disaster. It is a heavy burden on us and we do not know what to do about it.

“If not God, perhaps I would have been consumed,” he remarked.

He is calling on the government, well meaning organisations and individuals to come to their aid because they have suffered so much.