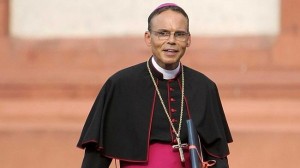 He just dropped a cool €2.9 million on renovating his palace and his lavish lifestyle is the subject of a legal investigation.

But now the Bishop of Limburg Franz-Peter Tebartz-van Elst, dubbed the “bling bishop”, has been summoned to Pope Francis’ office for a severe talking to, reports German news site The Local.

The German Bishop hit the headlines recently following accusations he flew business class on a trip to India and squandered money on luxuries.

The 53-year-old bishop is under pressure to resign after using church funds to build himself new private quarters in the brand new bishop’s palace, which also includes a museum, conference halls and a chapel.

His fancy new digs are reported to have cost almost €3 million and included a 63-square-metre dining room and a €15,000 bathtub.

The Vatican wouldn’t comment on the outcome of the bishop’s meeting with Pope Francis, only that it lasted for 20 minutes.

Speculation is mounting that the Bishop will be forced to resign, as his big spending is a bad look for the “poor church for the poor” Pope Francis wants to create.

Before his meeting with Bishop Tebartz-van Elst, Pope Francis gave a sermon in which he castigated greed, reports The Guardian .

“Take care to guard against all greed, for though one may be rich, one’s life does not consist of possessions,” he said in the chapel of Santa Marta.

A decision on the bishop’s future is not expected to be made until a full report on the scandal is provided to the Vatican.