Boko Haram Have Been Active Long Before I Became President – Jonathan

President Goodluck Jonathan Sunday said the activities of the Boko Haram sect which has devastated especially the north eastern part of the country is not because of him but is part of international global terrorist network. 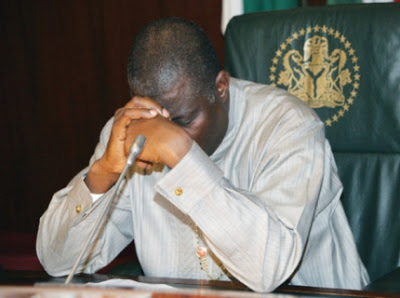 Speaking on a nationwide radio/television programme Presidential media chat, President Jonathan also insisted that the House in Apo where some persons were killed by security forces had elements of Boko Haram adding that though innocent persons may have died in the exchange between security forces and the terrorists, it does not mean that innocent persons were deliberately targeted.

“Boko Haram has been there even before I became the president. When the bombed the United |Nations and the barrack in Abuja, we did not have the capacity to tackle them.

But with time, we have built the capacity of the security services and we have made tremendous progress. I am not God so I cannot be everywhere. What I can promise Nigerians is that within the limit of our ability, we will ensure that we will try our best to ensure that we check the activities of these people and put an end to their activities” he said.

He said though the security services are doing their best to check the activities of the Boko Haram sect, the terrorists are always evolving ways in collaboration with international terrorist organizations to undermine the activities of the security agencies. Speaking on the recent killings in Apo, President Jonathan said ‘though innocent persons may have died, there were confessions from arrested Boko Haram operatives that there were arms in that building.

there is a confrontation between security operatives and criminals, innocent persons sometimes fall victims. But definitely, there were Boko Haram elements in that building.

The Boko Haram has links with their network with AlQaeda and other terrorist organizations. Some of the people that were arrested confessed and they were leading them to where they said arms were kept and there was an exchange of gunfire. In the process some people were arrested some died. I cannot say clearly that all those who died were members of Boko Haram but definitely there were Boko Haram elements there” he said.

Asked to confirm definitely whether the leader of the Boko Haram sect, Abubakar Shekau was dead, President Jonathan said he cannot say for sure whether the terrorist leader was dead or alive because there is no conclusive evidence to indicate that he was dead or alive.