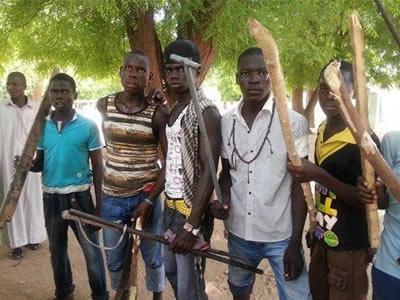 Mustapha made this known when he addressed newsmen in Maiduguri on reports of alleged actions of some members of the group.

“The main duty of the civilian JTF is to assist law enforcement agencies in their job of providing security to the society that is why they sometimes join the military at the check points.

“This does not give them a licence to take laws into their hands by harassing or arresting innocent members of the society”, he said.

Mustapha said that it was only law enforcement agencies that had the power to arrest or detain suspected criminals or Boko Haram militants.

“People should note that it is only law enforcement agencies like soldiers or policemen who have the power to arrest or detain suspected criminals like Boko Haram sect members or robbers.

“The idea of the civilian JTF trying to take laws into their hands by acting alone is wrong. This must stop now”, he said.

The deputy governor said that the state government was concerned about the modus operandi of some members of the vigilante group.

“Government decided to introduce a reorientation course for members of the group to change their perception and instill discipline in them.

“The first batch of trainees comprising 700 civilian JTF had just concluded their course and hopefully by next month another group of 1,000 will begin training”, he said.

Mustapha said that the object was to sanitise the operation of the civilian JTF as well as instill patriotism in them.