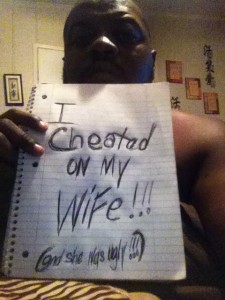 A thousand roses, boxes of chocolates, diamond necklaces, expensive shoes and cars. These are just some of the many ways men have tried to earn their spouses’ forgiveness after having cheated on them. Meet Ivan Lewis, the cheater, and Sonya Gore, the mastermind behind her husband’s unique and very public display of affection.

Lewis and Gore got married in 2010 but split after only 10 months because of Lewis’ constant cheating. After some time apart, during which Lewis reflected on what he had done, the guy decided to put an end to his unfaithful ways and do everything in his power to get Gore to forgive him. On September 22, he proposed to her publicly on his Facebook wall. Although many people were touched by his gesture, Gore wasn’t too impressed. He then posted a picture of himself holding a piece of paper which read “I cheated on my wife!!! (and she was ugly!!!)”, stating that he needed 10,000 likes in order for Gore to take him back. His plea was generally well received but there was a good amount of criticism as well: “My man wouldn’t have to show and prove it on fb! So, I’m probably one on the number who wouldn’t care for that!!”, Facebook user Latoya Holiday wrote. “Well if she was ugly why’d you do it?

Men always think the grass is greener on the other side, this is a lesson learned if she takes you back and if she does this should never come up again because once you forgive someone you can’t keep back tracking, move forward and keep God first, I hope yall make it work !” another user posted.

Unexpectedly, Gore was always quick to reply with supportive comments about Lewis, even stating that it was her idea to post the picture. In fact, she was also the one who wrote the message. Most people were very sympathetic towards him, stating that it took a lot of courage to publicly admit to his mistake, and that his response to criticism, “Bro I’m goin’ to get my wife back”, strengthened their belief in love and forgiveness.

As of September 30, 00:00 (might need to recheck later), Lewis’ bizarre photo received 14,050 likes on Facebook and was shared 1,142 times. Although the 10,000 threshold has been met, Sonya Gore hasn’t yet forgiven Lewis, but he is hopeful that she will, eventually.