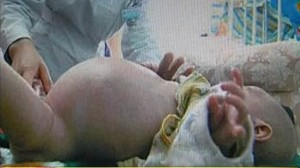 A two-year-old Chinese boy had surgery to “give birth” to his twin brother, after stunned doctors discovered his parasitic twin brother’s foetus inside his stomach.

Xiao Feng, from Huaxi, China was taken to hospital after his stomach became so enlarged he was having difficulty breathing. X-Rays and MRI scans revealed Feng was carrying the undeveloped foetus of his twin inside his swollen stomach.

Shocked doctors diagnosed Feng as “pregnant” and rushed him into emergency surgery, where he was forced to “give birth” as doctors removed the twin foetus, reported the Inquisitr.

The foetus was 20cm wide and had developed a spine, fingers and toes. It had grown so much that it was taking up almost two-thirds of the boy’s stomach, doctors said.

The rare case of conjoined twins, known as cryptodidymus, is the case is extremely rare and possibly unprecedented in medicine, the Inquisitr reports. Conjoined twins form when the fertilised egg fails to separate completely. [NL]