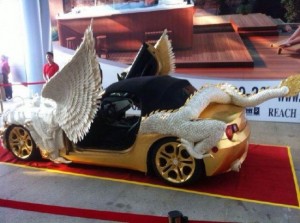 The BMW Z4 is a sleek, modern and luxurious car, famous for its incredible raw power. But not this particular Z4 from China which was transformed into a golden dragon on wheels by some overly-traditional tuners. Golden boy here features dragon wings, a tail, claws, wings as well as some other over-the-top accessories sculpted out of yak bones.

As if painting a BMW gold wasn’t bad enough, the people responsible for this extreme tuning job decided it would be a good idea to give it that traditional Chinese dragon look by decorating it with various body parts sculpted out of yak bones. The front of the car features a dragon’s snout complete with two eyes and its characteristic whiskers. The beast’s claws rest above the huge gold rims and the car’s butterfly doors have been transformed into feathered wings.

At the back, the dragon’s scaly tail rests on the BMW’s trunk. The masterpiece has been exhibited at the China Import and Export fair in the southern Guangdong province, where it managed to turn quite a few heads. While it is not our cup of tea, we can appreciate the painstaking work that must have gone into carving all those scales from yak bone. We can only hope that next time, the makers of the Dragon BMW will decide to utilize their skills in creating something less tacky. 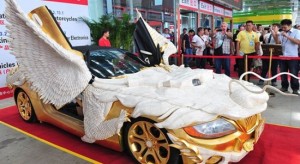 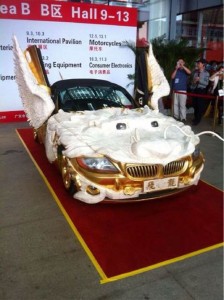