The outbreak of cholera in Okota area of Lagos State might have killed about 12 persons, with several other affected persons hospitalised in different parts of the state.

Reports say scores have died in some parts of northern Nigeria from cholera outbreak, most notably in Zamfara and Sokoto states.

Deaths and hospital admissions were said to be recorded in Okota, Bucknor, Jakande Estate, Oke-Afa Canal, Ejigbo, Ikotun, within the last three days witnessed patients, who were on admission suffering from the scourge.

At Femi Killa, it was gathered that about three persons died after eating the local African Salad, which they bought from a food vendor in the area. 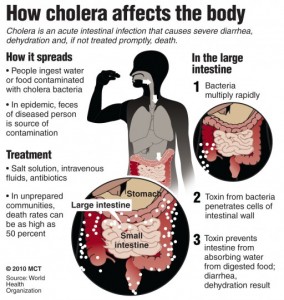 Medical Director of Ago Medical Centre, Dr. Kola Afolabi, said there was an outbreak of gastroenteritis, which he described, as one of the symptoms of cholera.

“For the past one week, patients with frequent diarrhoea and vomiting have been brought to my hospital, but I cannot say it is cholera because a diagnosis must be conducted to confirm cholera.”

Lagos State Commissioner for Health, Dr. Jide Idris, admitted that they had recorded cholera cases, but stated that it would be incorrect to call it an outbreak, adding that they were on top of the situation.

“That 12 people have died is totally incorrect. I am only aware of one case. Compared to other parts of the country, it is not proper to call what is happening in Lagos an outbreak.

“We have sent our officials to the various local governments where it has been reported and the victims are being adequately treated. The public should maintain good personal hygiene and ensure that their food and water are properly preserved,” Idris said.