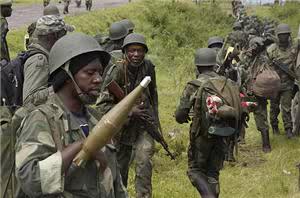 Congolese government troops entered the eastern border town of Bunagana on Wednesday as M23 rebels abandoned the last major town they were holding, rebel, army and aid officials have said.

The town was the first seized last year by M23 rebels in Democratic Republic of Congo and its loss is the latest success in an offensive by Congo’s U.N.-backed army, which is seeking to crush a 20-month rebellion.

The information was confirmed by a rebel and a Congo army officer.

The heavy fighting that erupted as Democratic Republic of Congo’s UN-backed army closed in on some of the last pockets of territory held by the rebels has forced more than 10,000 Congolese to flee into Uganda, officials and humanitarian workers have said.

Lucy Beck, a spokeswoman for the UN refugee agency in Uganda, said the Congolese crossing the border were now “too many to count”.

The number of Congolese seeking refuge in Uganda rose from 5,000 to more than 10,000 within hours on Wednesday, she said.

Humanitarian workers on the Ugandan side of the border said they could hear gunfire from the Bunagana border post just a few kilometers away.

Among those crossing the border on Wednesday was Bertrand Bisimwa, the civilian head of the M23 rebel movement, who was reported to be on his way to the Ugandan capital, Kampala, at the request of a mediator trying to bring an end to the 18-month rebellion, according to Uganda’s top military spokesman.

Bisimwa does not face arrest in Uganda, which has been mediating failed peace talks between the Congolese government troops M23 rebels since December, said Uganda Lt Colonel Paddy Ankunda.

The talks stalled again earlier this month, and within days clashes erupted between Congolese forces and the rebels.

The M23 movement emerged in April 2012, the latest incarnation of an ethnic Tutsi rebel group dissatisfied with the Congolese government.

Neighboring Rwanda, whose president is also an ethnic Tutsi, is widely believed to have provided weapons, recruits and training to the M23.

M23 briefly overtook Goma – a city of 1 million people – last November but has been substantially weakened in the past year by internal divisions and waning Rwandan support, according to a United Nations group of experts. [AlJazeera]