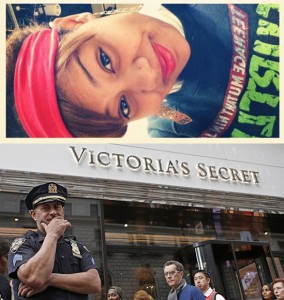 A teenage shoplifter was arrested after allegedly stealing from a Victoria’s Secret lingerie store in Manhattan on Thursday. A security guard searching the bags of Tiona Rodriguez and her shoplifting partner, Francis Estevez, found the dead fetus of a boy wrapped in a plastic bag at the bottom of Rodriguez’s handbag, the NY Daily News reports.

The discovery was made around 1:10 p.m. at the Herald Square store, after a store employee spotted the teens snatching sexy underwear and lingerie off a rack.

Rodriguez and Estevez, both 17, were charged with petty larceny and possession of stolen property.

Police responded to a routine report of shoplifters and detained the two girls in the store. A security guard detected a foul odor and the gruesome discovery was made.

Hours later, Rodriguez was wheeled from the store in a wheelchair and taken to Bellevue for an evaluation. Estevez (pictured above) was transported to the police precinct for questioning.

Rodriguez lives at home with her mother and her healthy 2-year-old son. She told police she miscarried the day before and put the dead fetus in the bag because she didn’t know what to do with it.

The baby’s body was hastily dressed in infant clothing and wrapped in a black plastic bag at the bottom of her purse. The shoplifted items were piled on top of him.

On Wednesday night, Rodriguez complained of labor pains on her Facebook page: “These Cramps, SON.”

Rodriguez’s friends told the News she probably didn’t realize she was pregnant. “I’ve known her since she was little, said Zami Ford, 17. “She was probably nervous and didn’t know what to do. She would never hurt anyone.”