’Corruption, Cause of Nigeria’s Insecurity’

A former United States ambassador to Nigeria, Mr. Walter Carrington, on Monday said that insecurity and the developmental challenges confronting Nigeria were caused by corruption. 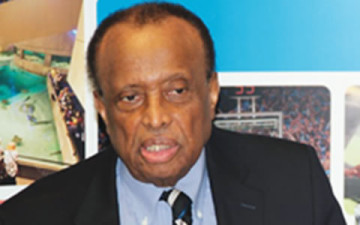 Carrington therefore advised the citizens to hold the leaders accountable and tasked the electorate to ensure that their votes served as an instrument to bring development.

He spoke at the 29th convocation lecture of the University of Ilorin, Kwara State. The lecture was titled, ‘On the dawn of Nigeria’s second century: challenges to a new generation.’

He counselled that corrupt and inefficient leaders should be voted out of power.

He said, “The problem of corruption leads to other problems, problem of insecurity and others. The good thing about democracy and the right of people to vote is that the people also have a responsibility to keep those who govern accountable to them.

“A cure must be found for the corrosive cancer of corruption.

“It is important, it seems to me, to insist that in future election, you demand that corruption be not only an issue to be discussed, the people who seek your vote will tell you exactly how they intend to fight corruption and if the ones in power do not do so, you can use your power to continue to remind them and in the next election, you vote them out of office. That, it seems to me, is the only way that it can be done in a democracy.

“But it is important to realise that from the very bottom-up, how serious the whole corruption is; whenever there is a story on television or newspapers about some misdeeds by some elected officials, my wife always say, ‘that will be nothing in Nigeria. They will never even be questioned.’ Whereas in US, they end up in jail for things that you will not even often question people about.

“So it is extremely important that there will be transparency and that you insist that every money that comes into the treasury is accounted for so that the people know how their money is being spent. That happens in US.”

He said that efforts must be redoubled to create an environment in which character and virtue are rewarded and not scorned.

The ambassador said it was regrettable that there had been many good people of high character who later yielded to corruption after putting up a good fight.

He noted that the country was blessed with great human and material resources. He said Nigeria had unmatched pool of human resources, adding that no country in Africa had such a richness of human capital, regretting however that many bright Nigerians were forced to leave the shores of the country during the military era.

“What made Nigeria the country that I looked up to for so long was the fact that it produced some of the most educated, most talented black people to be found anywhere on earth,” he said.

Carrington said that women should be given more opportunities to showcase their talents and potentials, describing them as a veritable force in national development.

He also said the country should diversify its revenue base from oil and gas to agriculture and other sectors of the economy, adding that there was the need to boost the processing industry such that Nigeria could process more of its raw materials which are currently being exported.

He said, “Nigeria has been too long an underperformer on the world stage. It has ceded to South Africa the pride of place as Africa’s leading spokesman. When the G-8 or other gatherings of the world’s most powerful nations occur, it is more often to Johannesburg that they call than to Abuja on those all too rare times when they seek an African perspective.

“In its second century as more than a geographical entity, Nigeria must at last realise its full potential. Even now, as woefully neglected as it has been, its manufacturing sector produces a large proportion of West Africa’s goods and services.

“What it has done for the region, it can certainly in the years ahead do for the entire continent.”