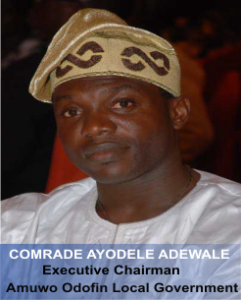 The face-off between the Chairman of Amuwo Odofin Local Government Area of Lagos State, Comrade Adewale Ayodele, and the Area Commander, Area ‘E’ Police Command, ACP Dan Okoro, has forced residents to call for a truce.

Some residents also called on Ayodele to stop distracting Okoro and allow him do his job.

The council boss had, in a protest, held at the Apapa Magistrate Court, Lagos, accused the Area Commander of engaging in brazen violation of human rights, state laws and traffic rules.

He led a number of staff of the local government as well as some residents of Festac Town in the protest where he demanded the investigation and removal of Okoro.

Ayodele stated that the Area Commander had been flouting the directives of the Lagos State Government as regards traffic law. His words, “Dan Okoro should explain to us why we still find containers here and there in Festac Town. He should explain why we still have cases of kidnapping, armed robbery and abandoned vehicles in Festac Town. This is becoming unbecoming of an Area Commander. It is rather unfortunate that Dan Okoro has usurped the power of the DPO, making him irrelevant in the scheme of things. Or how could one explain a situation whereby the duties of the DPO are being hijacked by the Area Commander.”