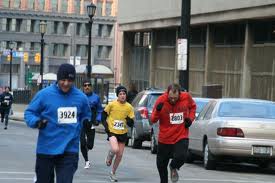 A couple ran the same Virginia Beach 10K race the morning of their wedding day, but the groom managed to not see the bride before they made it to the altar.

For two years, Brittany Owens, 23, and Joshua Waltz, 24 have participated in the Anthem Wicked 10K with more than 6,000 other runners who dress up for the Halloween-themed event.

They signed up for this year’s run, which was held Saturday, before setting their wedding date for the same day, The Virginian-Pilot reported.

“Then we were like, why not run the race? We’ve done it the past two years. Why not do it again?” Owens said.

Waltz ran far enough ahead of Owens that the two did not see each other during the race.

Owens walked up behind Waltz after the race, told him to look down at the ground and then blindfolded him before she gave him a kiss.

Hours later, at the Catholic Church of St. Mark, Waltz got his first glance of Owens as she walked down the aisle.