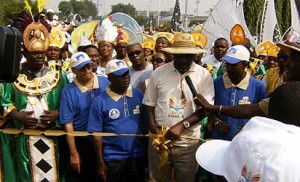 Cross River State Governor Liyel Imoke, yesterday, unveiled the 2013 Calabar Carnival at the Cultural Centre, Calabar, boasting that this year’s carnival will be the best ever.

According to the governor, “Carnival Calabar can be identified internationally and exported around the world. It has become a brand that everyone has identified because it is about the people, so with or without government behind it, it has become an international brand.”

“After Nollywood, Carnival Calabar is the highest brand in Africa and it is unique because unlike others, it is designed, programmed and costumed through passion and creativity,” Imoke said.

He said the Carnival Calabar is rich not just because of the panache, dance, costumes, culture, styles, designs, bliss and swag “but the ability to interpret its theme and conceptualise it into a package to generate attraction.”

The carnival reputed to be Africa’s biggest street party, the 12 kilometre long road shows has ‘Ain’t No Stopping Us’ as its theme for this year.

Accordingly, the theme is expected to be translated, interpreted and conceptualised into dance, costumes, floats and carnival spirit which will be a display of designs, colours and styles.

The interpretation and expression of the theme in both junior and senior categories will go with cash prizes.

The governor said further, “The Carnival has become so competitive that new winners have emerged and we intend to step up the prizes because it has now become not only a model but a reference point for others, so the theme is intended to create in minds that we can overcome everything as we have created a new industry in the country and we are excited about it.”

Karen Sauza, representative of OCIC and sponsor of the Brazilian Samba team to 2012 Carnival Calabar, disclosed that another Brazilian band would be participating in this year’s carnival.

She said the continuing participation of Brazilian bands at the Calabar Carnival affords both Nigeria and Brazil the opportunity for cultural exchanges, commending Imoke for promoting the carnival to become the best in Africa.