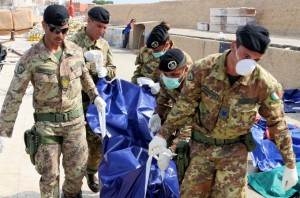 17 more bodies have been recovered by Italian divers, from the sea off the island of Lampedusa after a boat carrying more than 500 African asylum seekers sank last week.

The death toll stood at 211 as of Monday, but more bodies are feared trapped inside the smuggling boat which now lies on the ocean floor, 47 meters below the surface.

Hundreds of rescuers have been deployed to the island of Lampedusa, whose seas were described as a “giant cemetery”. Only 155 survivors were rescued.

“Bodies have been recovered from outside the ship and from the ship’s cabin. Now we have to get inside the hold,” Marini said.

More than 300 people are feared drowned in Thursday’s disaster, one of the worst single incidents involving economic migrants and refugees attempting the perilous sea crossing from northern Africa to Europe. 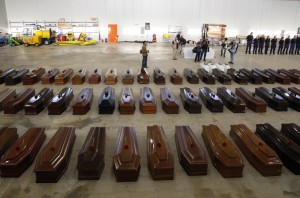 “We found a whole row of bodies that were inside and outside of the wreck,” said police diver Riccardo Nobile. “We tried to recover those that we could and we pulled them up in the time that we had remaining, but it was very little time.”

The disaster comes as European states prepared to address the growing refugee crisis. The recent disaster has underscored the human cost of Europe’s immigration crisis and the role that human trafficking gangs play in exploiting vulnerable migrants desperate to reach Europe.

About 30,000 asylum-seekers have landed in Italy so far this year, more than four times the number from 2012, although still below the 50,000 in 2011 at the height of the Arab Spring revolts.

The majority are Eritrean, Somalis and Syrians.