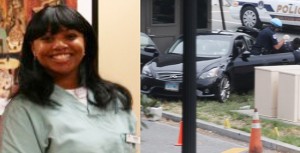 A Connecticut woman who was shot and killed by Capitol Police in Washington, D.C. Thursday may have suffered from postpartum depression and paranoid delusions.

Miriam Carey, a 34-year-old dental hygienist, was shot after she rammed a gate on the southeast side of the White House on Thursday.

According to a NBC report, Carey believed President Obama was stalking her.

The 1-year-old girl was in the back seat of Carey’s black Nissan Infinity sedan when she drove 270 miles from her home in suburban Stamford.

Capitol Police officers opened fire on the car as Carey sped off. She led Capitol Police on a high-speed chase through the streets of Washington, D.C. One officer was injured when he lost control of his cruiser and slammed into a concrete barrier.

Moments later, Carey rammed her car into a gate near the U.S. Capitol. Police surrounded the car and fired a dozen rounds into the vehicle.