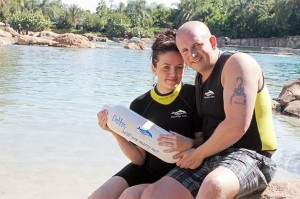 A man made his girlfriend’s dream come true when he got a DOLPHIN to deliver his marriage proposal.

Alex Rigby, 27, planned the romantic gesture when he and his girlfriend Debbie Preston, 26, were in Florida for a family wedding this weekend.

The Merseyside woman had always dreamed of swimming with dolphins so Mr Rigby decided to take her to Discovery Cove in Orlando to have a go.

Once she was in the water, she watched in complete shock as a dolphin started swimming towards her as if they were in a film with a buoy that said ‘Debbie, will you marry me?’

Luckily for the blushing groom-to-be, she said yes straight away, sparking celebrations for the family and friends who had joined them.

Mr Rigby didn’t stop there, he then planted a ring on the beach for when his fiancee arrived back on dry land.

She added: “I didn’t ever think I’d ever come to Florida, let alone swim with dolphins as well.”

Mr Rigby, whose wedding proposal has gone viral, admitted he had been planning the proposal for some time, but was never sure how to do it.

“When I decided to do it I thought, Florida… so many options,” he said.

“This is what she’s wanted to do all her life.”

And five-year-old daughter Brooke was over the moon with the news, having managed to keep it secret too.

Looking up at Ms Preston, she said: “Mummy, can I be a bridesmaid?”

Family members joked that “lots of sweets” were needed to ensure Brooke kept the plan under wraps.