When 35 year-old Adesuwa got married to Kevin Okihria from Iruekpen in Esan West Local Government Council, Edo State in 2004, she prayed that the resentment that bedevilled the union from some of her in-laws will fade with time. 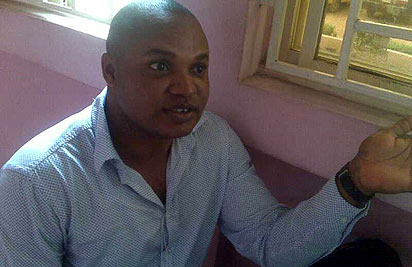 Few years after the union, a lot of issues, including the couple’s inability to have a child of their own, compounded her fate. The sordid situation ended up with the death of both the mother in-law and her husband under mysterious circumstances that now pose a great threat to her life. Before then, Adesuwa and Kevin Okihria were inseparable despite the odds, praying and hoping that one day, they would have their own baby to bless their union.

The relative peace they maintained in their home was the envy of friends and neighbours at their No 18, Modupe Street, Balogun bus-stop Ikeja, Lagos who though were aware of the challenges the couple faced, marvelled at how their marriage stood the test of time. This was however, short-lived as Kevin’s mother took ill and they found themselves saddled with the sole responsibility of taking care of her.

The distraught widow narrated her story: “Shortly after Madam Okihria took ill, members of her family decided that she was brought to Lagos for proper medical attention which was a far cry to what was obtained in the village. When we brought her to Lagos, she was admitted at the Naval Hospital, Ojo where she spent two weeks during which various diagnostic tests were conducted on her. I and Kevin noticed that she was not responding to the medications been administered on her, so we decided to take her elsewhere.

This, however, did not go down well with doctors at the Naval Hospital who had no choice than to compel my husband to sign an undertaken which he did. The quest to get the best for mama took us to four different hospitals that included; Rivet Hospital, Ajao Estate, Mobineki Hospital, Dopemu, Unity Hospital,Ikieja and Trinity Hospital off Awolowo way and the General Hospital in Ikeja. “In all these hospitals, it was only at Rivet Hospital that it was discovered that Mama was suffering from kidney failure, liver enlargement and septicemia.

We were told that mama had to be put on dialysis. We couldn’t really understand why the repeated calls put through to my husband’s siblings who reside in Nigeria, most especially, one Linda Okhiria(Kevin’s sister), was not replied. I called Kevin’s brother,Tony Okhiria who lives in the United States to report his sister’s attitude but Tony advised me to simply ignore Linda because her presence would not help matters rather she might compound issues;and he encouraged us not to relent in taking care of their mother.

“A few days later, to our surprise, Linda showed up at the hospital and without talking to any one, asked mama repeatedly “have you reversed the thing”? After some seconds, mama managed to mutter, “yes, I have reversed it”. And Linda left. I and my husband were lost because we had no clue what that was all about. Mama pleaded with us to take her away from the hospital; when we demanded to know why, she simply said “well, I am saying this because if I die here, your brothers and sister will heap the blame on you.

They will even insinuate that you used me for ritual purposes. “Out of the fear of what mama told us, we notified some family members. It was the collective agreement of these groups that saw mama taken back home to her villager in Edo State. On getting there, mama was admitted for further treatment at the Irrua Specialist Hospital and we engaged the services of one Sister Lovett to take care of her, we also sent weekly allowance to Lovett for her upkeep.

These gestures did not impress her relatives who never saw anything good in whatever we did; tongues started wagging that we deliberately “dumped mama to die.” When it got out of control, we were compelled to visit mama at Irrua where we observed that she was fast deteriorating. “On our return to Lagos, I told my husband that based on the countenance and body language of some of his family members during our visit; they might have plotted to bring mama back to Lagos.

But Kevin said that would not be possible, I was however taken aback when he added “I know they want to get me through my sick mother but I am not sure they will bring her here, for what? he asked. “A few days later, on arrival from an outing, we met a vehicle which we immediately recognized as a Peugeot wagon driven by one Mr. Samson that ply the Ekpoma to Lagos route parked at the entrance of our house; on a closer look, we saw mama all by herself with no family member accompanying her inside the vehicle, half dead.

We were shocked and raised alarm which attracted our neighbours. “We immediately put on hold every other thing and sought for a hospital to take mama to; but due the bed sore and the stench from the sore, we were turned down at the hospitals we went to. This made my husband to Tony, his elder brother in the USA and one of his uncles in the village informing them of the situation. He specifically informed the uncle to help him look for another maid because he has concluded plans to return her back to the village.

“After some meetings, the family decided that we take mama to a hospital in Benin City instead. There was however, division amongst them as some thought there could be spiritual connotations to the issue and as such, mama should be taken to some traditional healing home instead. Others argued that the medical doctors who all along had treated her be allowed to continue, another group also thought she should be taken to church instead. This last group won as the woman was taken to one ‘God fearing Church’ in the Ogida part of the Benin City where she eventually died.”

Crime Guard gatherd that after the death of their mother, the story took a different dimension. She continued, “After that, Tony, my husband’s elder brother in USA demanded to know how their mother died. “Whenever such questions of how their mother died was posed to Kevin by Tony, my late husband wept bitterly. The calls persisted that at one point, I decided to put a stop to it by snatching the phone from him and putting it out. Also, my husband suddenly became paranoid and insomniac, talking all by himself and punctuating such talks with “they want to kill me, they have bewitched my home, and they have taken procession of our cars.

Doctors and sympathizers advised us to seek spiritual solution to the problem. That was when we decided to go to the Synagogue Church of Nations in Ikotun –Egbe, Lagos. “On our way to Synagogue Church to attend one of their Thursday services, my husband suddenly parked his SUV by a palm tree and pointing at it, he started shouting “look at them, they are here already.” When I looked closely at the top of the tree, I saw an owl perching on one of the branches.

After that encounter, we decided to shift the trip till the following day which was a Friday. At about 7pm of that Thursday, we checked into a hotel close to the Church. “At about 11 pm, Kelvin suddenly got up and said we should return home, according to him, some spirits were waiting at the gate of our house. After a heated argument that attracted some staff of the hotel, we were soon home bound getting to Ikeja a little after midnight. But to my shock, my husband suddenly exclaimed “oh they are not there, let’s go back to Ikotun”.

Out of fear and respect for him, I did not object to that. He reversed and we headed back to Ikotun, and arrived the hotel at about 1am. It took some minutes of pleading before the Manager ordered the security men to open the gate for us. We were also allowed into the room earlier allocated to us after which my husband changed into his night wear. Instead of relaxing, he suddenly changed back into the cloths he came in with and ordered me to pack our belongings as we are going back to Ikeja. “I objected.

From then, he became hysterical and started banging on the doors and windows. The other guests and staff woke up, all efforts to calm him down failed until he was allowed to sleep inside our SUV parked outside. All the while, I was in contact with Professor Goodluck and their family doctor who both advised me to take things easy promising they would come to my aid the following morning. The following morning which was a Saturday, hell was let loose as he became violent, chasing me and everyone in sight; when he eventually caught up with me, he hit me so hard in the face and dragged me on the floor to where our car was parked, shoving me in into the car.

He pulled off his shirt and asked me to put it on. I quickly did to avert more beating, a few minutes later, he jumped out of the car and ran away. In the midst of this confusion, I ran after him shouting to anyone in sight to help me hold him. “Some Mobile Policemen on guard at one of the companies nearby and some passersby managed to stop him.

Despite this attempt, he became so uncontrollable and at one stage, attempted to disarm a Mobile Policeman, that was when it was advised that his legs and hands be chained pending when we would gain access to the officials of the Synagogue Church. However, when the family Doctor came and observed his violent behaviour, he advised that we take him to the Psychiatric Hospital in Yaba instead. Kelvin gave up the ghost on our way to the hospital,” the widow lamented.