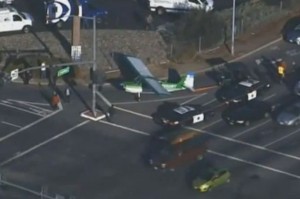 A pilot and scores of commuting drivers had a lucky escape after a plane landed on a busy motorway in the middle of the morning rush hour.

The dramatic landing in California’s Silicon Valley happened at around 8am when the pilot noticed a malfunction not long after taking off.

He managed to avoid vehicles driving along the highway, pulling his Bellanca 7ECA single-engine aircraft off into a right-turn lane.

San Jose police said both the pilot and his passenger were unhurt, and no one of the ground had been injured.

Sky News reports the aircraft is owned by Amelia Reid Aviation LLC, who run a flying school from nearby Reid Hillview airport.

The miracle landing came just two days after a vintage aeroplane touched down on another highway – this time in Florida . Those involved in the earlier incident also escaped unhurt.