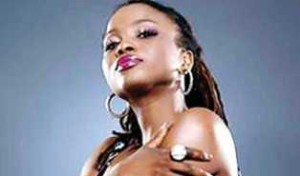 Do all of you still remember Ego??

Ego Ihenacho Ogbaro, the petite lady was the only female vocalist with Lagbaja’s band until she left to pursue a solo career in 2007.

She says music has made her a better person. Ego has backed-up for the masked musician on several tracks including ‘Konko Below’ and ‘Nothing For You’ but her soulful wailing in ‘Never far Away’, a track in Lagbaja’s ‘Africano’ album, remains indelible in the minds of fans.

In an exclusive interview, Ego spoke with Saturday Vanguard about her life after she left Lagbaja’s camp.

*Who was Ego as a child?

I was a very stubborn child and I am still very stubborn(chuckles) because I always wanted my way. It was my way or no way. Although I was a lively child, I didn’t let things get to me or weigh me down. I easily get angry and I think I am just myself.

*How has it been since you left Lagbaja ?
I always knew that I wanted to sing and it was just a matter of time before the dream manifested.
What I wanted to do was totally different from what I was doing with Lagbaja. It was the same music thing but in a different way. Yes, people would have their doubts and not even know what direction I was going.
It was a step that I had to take, something I had to prove and had to show the world that I knew what I wanted and I was moving in the right direction. So, it’s natural for people to feel that way and have doubts. So far, it’s been good.

*How long did you work with him ?
I worked with him as a solo artiste for 12 years and I learnt a lot from him, like hard work and not compromising.

*At what point did you realise that you were going make a career out of music?
I have always been surrounded by music from my childhood. I’ve always loved music but I took it for granted. When I left secondary school, it was more of a hobby for me. I joined Colours Band which later became Lagbaja’s band. It wasn’t until then that I began to take it serious. I started going for shows and I was making money from it, so I was like okay, this is something I enjoy doing and I am making money from it; it’s not a bad thing. It was at that point that I began to take it serious and I said to myself, ‘let me give this a shot’.

*Do you have your own band as well ?
Yes , it is called Indigo.

*What inspired you to form a band ?
I am a live performer, so there was the need to get my own band. This is one of the problems that most artistes face today. They find it very difficult to perform with a live band. It is very important to play with a live band. I first look for those that can form the band with me.

Though, I am not taking anything away from those that use live band; but I just feel that when you use a live band, it’s fun. You can improvise and express yourself. You are not much of a musician if you cannot sing with a live band. I always knew that I was going to use a band. As much as I like singing my own songs, I like singing other people’s song and this was how I even started. Let me state that this is totally different from miming. We do this at events such as weddings, corporate events and other events. It is the same band, that is, Indigo that also back me up whenever I want to sing as Ego .

*What are your likes and dislikes?
Basically, I like real people, down to earth people, intelligent people and the ones that can push me to get a better result. I cannot stand people who are fake but people with fantastic sense of humour.

*Since you parted ways with Lagbaja, have you released any album on your own?
Yes , I released an album this year titled First Step but before that, I have released three singles and two videos and I am very encouraged from the feed-back.