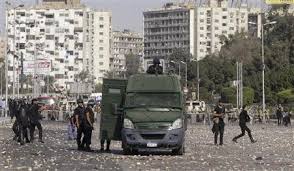 The pro-Morsi demonstrators marched on Monday outside the campus of Al-Azhar University in Cairo, blocking a main road as they chanted against the military who ousted Morsi in July.

There were no immediate reports of casualties as police fired tear gas and birdshot to disperse the students.

Watched by police, Egypt’s pro-Morsi activists have turned universities into protest hubs to galvanise their movement four months after Morsi was toppled.

Demonstrations took place last week at the universities of Al-Azhar and Cairo, where fights broke out between supporters and opponents of Morsi.

The Muslim Brotherhood and supporters have rejected the military-installed government and regularly stage protests against the army, which ousted Morsi on July 3 after millions took to the streets demanding his resignation.

More than 1,000 people, mostly Morsi’s backers, were killed in clashes in an ensuing crackdown on the former president’s Muslim Brotherhood movement.

Another 2,000 people have been detained.

Morsi, held at an unknown location since his removal, is to stand trial next month over deadly clashes between his supporters and opponents outside the presidential palace in December 2012.