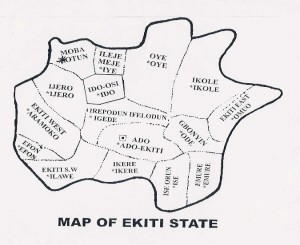 About 792 loval government council workers in Ekiti state may lose their September salary.

Disclosing this why speaking to newsmen at his office in Ado-Ekiti, Wednesday, the Chairman of the state Local Government Service Commission (LGSC), Mr. Ranti Adebisi said, the figure represented those who were not on found their duty posts.

He said the affected officers were absent when the task force set up by the government to authenticate the actual number of staff at council areas arrived at their respective council areas.

Adebisi, who dismissed the rumour that the figure were those to be sacked said the government had no intention to sack any staff at the councils.

“There is no truth in the rumour that this commission is about to sack 800 council workers. There is a biometric team that has been going on and monitoring the attendance of workers to determine ghost workers in the local governments. But I have not recommended that those affected should be sacked,” he said.

According to Adebisi, what the committee recommended was that the salaries of those affected should be suspended until we can clarify whether they are workers of the local government.

He, however, added that his commission had setup another committee to revalidate the lists within three days.

“The commission has requested that all the affected officers should report at the commission clarification. We just want to discover why they were not on duty posts at the various times that the team visited,” he said.

Displaying the committee’s report, Adebisi said it had since been signed by the state Governor, Dr. Kayode Fayemi.

He also dismissed the allegation that those to be punished were the ones who participated in the September rally organised by a gubernatorial aspirant, Hon. Michael Bamidele.

“He said names of those affected had been displayed at the various council areas because we don’t want people who are not affected to be worried. The DAs, the NULGE chairman were party to the list, they helped us to compile the lists. So, if anybody is talking about MOB (acronym for Bamidele), that person is economical with the truth because he has no bearing with me,” he said.