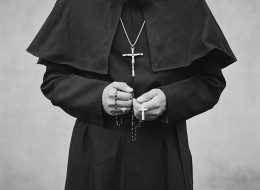 This “priest” may carry a cross, but he’s no man of the cloth.

On Wednesday, police in Italy discovered a man dressed as a clergyman had six kilograms of cocaine stashed in a suitcase covered in holy symbols. As Italy’s The Local reports, the fake priest carrying cocaine was identified as Francesco Foresta, a 61-year-old man from southern Italy.

Authorities in Bardonecchia, a town near the France-Italy border, pulled over the costumed man and his girlfriend andarrested Foresta after discovering the drugs. Police believe Foresta traveled with the cocaine by plane from Brazil to Paris, France, hopped a train to Lyon and crossed the border to Italy in a vehicle.

According to the ANSA news agency, police said the faux priest confessed to the crime, admitting that he was smuggling the cocaine because of financial difficulties.

Earlier this year, an actual cleric was detained at a Russian airport after authorities discovered the Colombian man had cocaine hidden in his digestive tract and luggage.