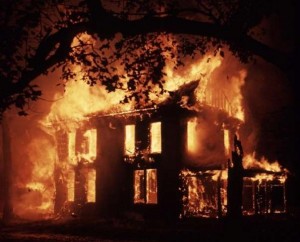 A 50-year-old Togolese and his two children were weekend burnt to death at his 8, Odofin Street residence in Ikotun area of Alimosho Local Government, Lagos State after the family’s generator exploded and completely razed their two-bedroom apartment and property.

The deceased’s wife and one other child who survived the incident were severely burnt and are receiving treatment at the Lagos University Teaching Hospital, LUTH.

The incident happened at about 8.00pm when one of the children took a lit candle near the generator that had just been filled with petrol.

According to sources, immediately she was close to the generator, it caught fire and exploded, engulfing the entire flat.

One of the victims who had been severely burnt before help could come, died on the spot, while others were rushed to where two others eventually died.

The incident was reported at the Ikotun Police Station.

The bodies of the dead family members have been deposited at the mortuary in Ikeja for autopsy.