For about four months now, students of Nigerian universities have been out of classes. 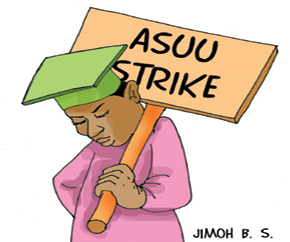 Frustrations of the Academic Staff Union of Universities (ASUU) grew to misgivings and mistrust of the government with which it signed an agreement way back in 2009. ASUU therefore slammed the doors of the lecture halls for what it called “total and indefinite strike”. Since then, parents and students have been left counting days which melt into weeks and developed to months while those involved in ending the industrial action dilly-dally within the same cycle of deadlocked meetings.

We view the whole altercation as needless as the issues at stake are in no way ambiguous. What the lecturers’ union demand from the government is for it to honour its own promises made in 2009 for improved funding of the university system and working condition of the lecturers. Though the government has now device means of strategically disowning the 2009 agreement signed between its representatives and ASUU, it should be reminded that government is an institution and not persons. Change of administration should not be an excuse to renege on binding commitments made by the government especially that relating to a critical area like education.

Underfunding of the education sector, over the years, has had collateral effect on country. Our universities, hitherto exemplary centres of excellence that attracted academics from far and near, have now become grotesque carcasses of their former selves. In a shameful development, Nigerians from lower and upper classes fall over themselves to leave the shores of the country for studies. A report released last year put the figure of what Nigeria loose to overseas studies at N1.5 trillion per annum. It could be higher. Embarrassingly, countries like Ghana, Uganda, Togo, et cetera – that were hitherto considered far below ours in all respect, have now turned to our saving graces to educate our people. Ghana alone is estimated to be benefitting from about N160 billion from hundreds of Nigerians trooping to pursue university education there.

While those who should act to better the system of education send off their children to choice universities around the world, the result at home is a further nose-diving of what remains of quality in the universities. Last year, a committee headed by erstwhile Executive Secretary of the Tertiary Education Trust Fund, Prof. Mahmood Yakubu, which conducted a need assessment of universities, came up with a report that unearthed the odious rot in the system. The report, which was commissioned by the government itself, bared it all on the appalling condition of the universities both in human and infrastructural terms. While the teacher-student ratio stands on the average at the embarrassing figure of 1:100, basic teaching tools in laboratories, workshops and libraries were discovered to be either grossly inadequate or nonexistent. In most, if not all, the universities, students have no adequate boarding facilities while some defecate in the open, due to absence or inadequacy of toilet facilities. These same students, according to the report, take lecturers in jam-packed lecture halls and theatres.

The consequence of this criminal neglect of the education system is the soaring number of half-baked graduates coming out from these institutions. Though the teachers could not be absolved of blame in this, it is however fair to expect a good result when the condition for good performance is set. Under the decrepit condition of our university system today, expecting well-refined graduates to come out of it is like sowing a maize seedling and expect to harvest wheat.

Although some Nigerians may view the present action of ASUU as extreme and painful, we agree with the union’s leadership that this should be an issue that should be resolved once and for all. This painful pill of shutting students out of classes would have to be taken in the face of unresponsiveness on the part of the government. A government that could not stand by what it pledged four years ago has shown that its thick skin could only respond to a stern action like this.

This round of strike is another sad reminder of how this inept government has relegated education to the lowest rung of its ladder, to the detriment of the much desired human capital development for the country. While money is being spent on frivolous and self-satisfying ventures that would have no benefit to the average citizen, education is being left to suffer with only occasional handouts in the name of budget, which is also rarely implemented to the latter. This year, budgetary vote to education was a paltry nine percent of the total budget, which falls far below the UNESCO recommended 26 percent allocation.

Across the country, there is resounding outcry on the government to urgently do something to end this impasse. In fact, there have been reported rise in crimes due to juvenile delinquency, which the students are exposed to because of the strike.

By its adamant behaviour, the government is opening the doors of the prison while those of schools remain shut – apologies to Victor Hugo. We therefore strongly call on the government to as a matter of national importance meet up its obligations and let teachers reopen classes. We cannot afford pushing more and more youth to the brink of anti-social behaviour and further weaken already bastardised human capital base of Nigeria. Failure to resolve this is a crime against Nigerians.