As the  national struggle of ASUU  to save  Public Education  especially the  University system entered its third months, the Academic Staff Union of Universities ASUU has accused the Federal Government of paying lip-service to Education development in Nigeria. 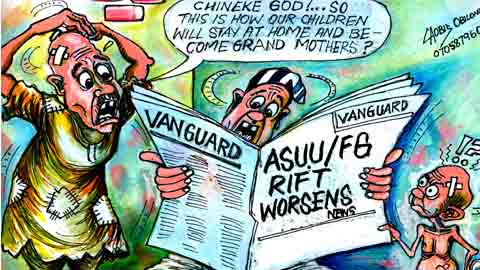 Dr Karo Ogbinaka, ASUU Acting Zonal Coordinator, Ibadan Zone said: “After the meeting of Tuesday, 19th September 2013 with the Vice President, it is clear that the FGN is merely paying lip-service to Education in Nigeria and deceiving the Nigerian Public on their commitment to its transformation agenda.”

Ogbinaka who urged the Nigerian people not to be deceived by the Federal Government said, “How can there be a meaningful transformation when the Education sector is neglected and gradually taken over by Private entrepreneurs including government functionaries who are busy building private Universities with stolen funds in and outside Nigeria?”

He re-affirmed ASUU decision not to back-out in its struggle for the emancipation of Nigerian people through ensuring that the government of the day is made to do what is right in the Education Sector.

According to him, this is a commitment that all members of the Union have vowed to pursue to its logical conclusion.

“Our appeal to all patriotic Nigerians is for them to support ASUU in this struggle to safe our Public Education in Nigeria and secure the future of this great country, he added.

In a released, Ogbinaka said that in spite of the spirited efforts of the Union to revamp the rot in the system, the government has remained adamant and intransigent in honouring the agreement it freely entered into with the Union in 2009.

He noted that ASUU has demonstrated great commitment and patriotism since 2006 when the negotiation started and culminated in the 2009 agreement. He pointed out that the Union has allowed government to use its agencies to verify the claims of decrepit infrastructure in the University System. “This resulted in the production of the Needs Assessment Document of 2012,” he said.

Ogbinaka disclosed that in the negotiation of the agreement, the government was made up of important personalities in Nigeria under the Chairmanship of Deacon Gamaliel Onosode with Professor  Musa Abdullahi, Professor Greg-lwu, Professor Mahmood Yakubu adding, Professor Julius Okijie, Professor Ibidapo Obe, Professor Peter Adeniyi and several notable individuals served as Advisers.

He explained that for many years after the agreement was signed by both parties, ASUU has expressed its frustrations at government negative disposition in honouring the agreement.

He said: “When it became obvious that the Federal Government is bent on reneging on the 2009 ASUU/FGN Agreement and 2012 MOU, the Union had no alternative than to commence this painful strike action.

“Since the commencement of this strike, government has equally demonstrated to Nigerians its unwillingness to implement the agreement freely entered to with ASUU, After several meetings between ASUU team and representatives of the Federal Government of Nigeria, there has been absolute demonstration of bad faith by Government.

“This led to the intervention of the Vice President of Nigeria, Arch, Nnamadi Sambo.

“The Ibadan Zone of the Union comprising University of Ibadan, University of Lagos, Onabisi Onabanjo University, University of Agriculture Abeokuta, Lagos State University, and Tai Solarin University of Education, Ijebu-Ode are resolved to continue with this crusade to force the FGN to faithfully implement the 2009 Agreement and 2012 MOU in order to safe and secure the future of our children.

The highlights of the agreement which involves amongst other things: to reverse the decay in the University System in order to reposition it for greater responsibilities in National development, to reverse the brain drain plaguing Nigerian Public Universities,  to restore Universities through immediate massive and sustainable financial intervention (proper funding); and to ensure genuine University autonomy and academic freedom.