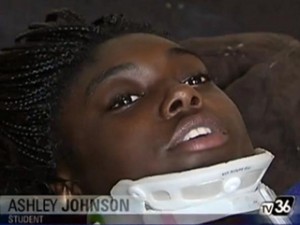 Ten students were suspended from Pittsburg High School in California this week after posting a photo to Facebook and Instagram that appeared to show their principal, Todd Whitmire, putting a classmate in a chokehold.

Whitmire defended himself, saying the photo was taken out of context and that he was trying to restrain the student during a fight when she slipped and fell.

“I had separated her and she began struggling and I was pushing her away to get her away from the area and she fell down,” he told the Contra Costa Times.

Still, he insists it wasn’t the alleged distorting of the photo that led to the students’ suspension, but rather concern for the teen in the photo.

“It was the reposting, the retweeting, and keeping it alive and assigning negative comments to it and creating a hostile environment [for the girl],” Whitmire said.

That girl, Ashley Johnson, says Whitmire had no reason to restrain her since she wasn’t fighting back against the male student who attacked her, and accuses the principal of using too much force.

“I wasn’t fighting back. I was lying on the ground,” Johnson, who is currently in a neck brace, told KTVU.

Meanwhile, a school resource officer backs up Whitmire’s side of the story, saying officers were made aware through social media that several students were planning to fight in the quad.

“During (the melee), staff members were pulling people away from one another,” said Lt. Ron Raman. “The principal tried to pull a student away and she fell and he fell down with her.”

Raman added that there was no evidence of battery, and no charges will be brought against Whitmire.